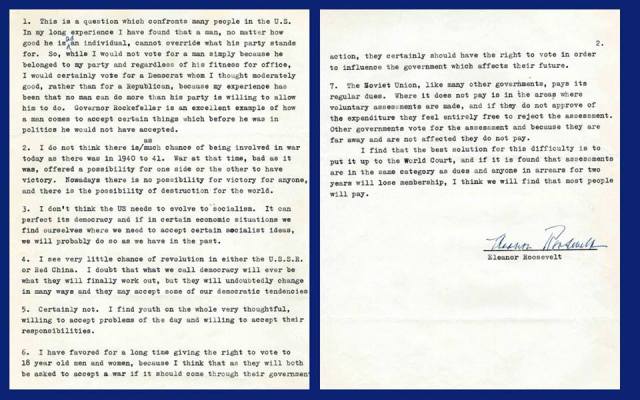 In January 1962 (or thereabouts) I wrote to Eleanor Roosevelt to interview her for “Smoke Signals,” the mimeographed student newspaper of Morrisville-Eaton Central School. I sent her seven questions and she responded in due time with seven typewritten answers. Historians say she typed her own correspondence on a typewriter now on display in the Franklin D. Roosevelt Presidential Library and Museum in Hyde Park. Note that she made a handwritten and typewritten correction to this document. Fifty-two years on, I am thunderstruck by the time she took to do this for a tiny school district (approximately 500 students K-12 in 1962), and awed by her carefully thought-out answers.
I didn’t keep a copy of the questions I sent her, but they would have resembled these:
1. As a lifelong Democrat, would you ever vote for a Republican you believed was a better candidate?
2. What are the chances the United States will have a war with the Soviet Union?
3. Do you think the United States is evolving into a social welfare state?
4. Is there any chance the people of the Soviet Union or Red China will rise up and demand their governments become democracies?
5. Do you find today’s youth to be self-absorbed and irresponsible?
6. Do you favor lowering the voting age to 18?
7. If the Soviet Union does not pay its dues to the United Nations, do you think they should be thrown out?