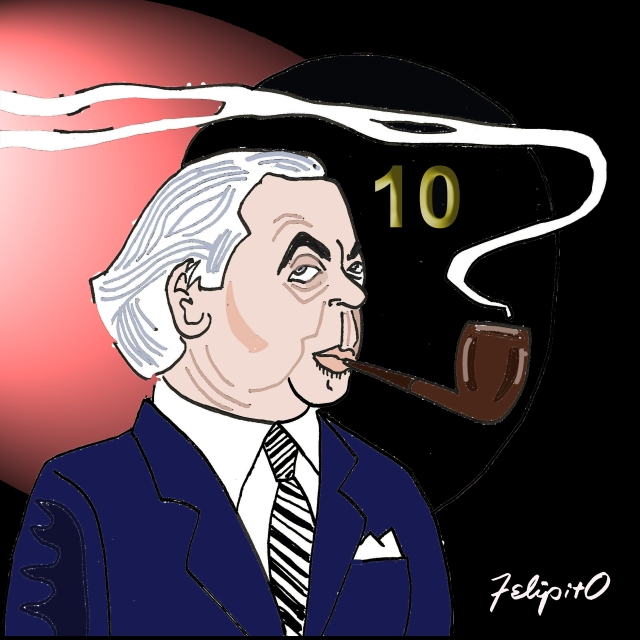 The Divine Doc M and I binged our way through season 3 of the Netflix miniseries The Crown.

The series purports to make reasonable guesses about what Queen Elizabeth II, the Royals, and a succession of prime ministers said to each other behind closed doors. How close they came to replicating actual conversations is anyone’s guess. My guess is: not very.

The opening episodes of season three corresponded to the years I spent on a U.S. Air Force base in England (1965-68) and I followed the drama with special interest. In 1967 (I think it was) I stood in a London crowd watching the Royals process in carriages and on horseback toward the Trooping of the Color ceremony (I think it was). The Queen herself, dressed in a red tunic and mounted side-saddle, passed close to my vantage point. Barely 40 years old, she looked younger and prettier than I expected. She smiled at the crowd as her horse loped and she held her right hand aloft in a rigid wave.

But I must admit I had little interest in the Royals back then. I was very interested in following the Labour government of Harold Wilson, who was prime minister during all my three years in the U.K.

Wilson had willowy white hair and dressed elegantly like the Oxford Don he was. He had a flat, nasally voice and a tendency to repeat catch phrases which made it easy for comedians to imitate him on the BBC. He liked to say, “I think we must be perfectly clear” as a preface to his esoteric and often turgid comments on economics, which satirists found very funny.

As a loyal American airman, I kept quiet about my admiration for Wilson’s strong views opposing the U.S. war in Vietnam. I tried to find ways of seeing him whenever I was in London. I managed to be in the city the night the House of Commons scheduled a debate on whether to support the U.S. war and sat in the visitors’ gallery. I was probably expecting a quietly genteel exchange of views and was surprised when Wilson had to shout over jeering comments from the Tory opposition. Then the Tory leader, Edward Heath, stood to speak and the Labour benches jeered him. It was as entertaining as a football match.

In season three of The Crown, Wilson (Jason Watkins) admits to the Queen (Olivia Colman) that he really doesn’t like to smoke a pipe. He said he really prefers cigars, but his working class constituency considered cigars the vice of choice of capitalist aristocrats.

I’m not sure that’s right. It’s hard to find a picture of Harold Wilson without a pipe in his hand or in his mouth.

One spring day when I was in London, I notice a small crowd of reporters and others gathered outside  Number 10 Downing Street. I decided to join the crowd to see what would happen. After twenty minutes or so, the famous door opened and Harold Wilson stepped outside. He held a large meerschaum between his uneven teeth but quickly removed it to hold it high over his head. The reporters snapped pictures and I joined the crowd in applauding the P.M. He smiled and nodded politely as he jumped into a smallish black car and sped away.

“’Ad ‘is pipe, din’tee, old ‘Arold?” said a man who had been standing beside me. Looking back, I think we would have been appalled if he had been smoking a Churchillian cigar.

I continued to follow British politics after I returned to the U.S. Edward Heath replaced Wilson as prime minister after the Tory victory of 1970. Wilson returned to office in 1974 as the head of a coalition government.

On March 16, 1976, Wilson unexpectedly announced his resignation as prime minister. He explained – unconvincingly – that he had always planned to retire at 60. More likely – as he is shown telling the Queen in a poignant scene of the mini-series – he had become aware that he was suffering early signs of Alzheimers.

The Queen and the Duke of Edinburgh bestowed a special honor on Wilson by dining with the Wilsons at 10 Downing Street shortly after his resignation was announced. The only other time she had bestowed this special honor was for Winston Churchill when he resigned in 1955. In 1983 he was granted a life peerage as Baron Wilson of Rievaulx, after Rievaulx Abbey in his native Yorkshire. He died in May 1995.

The dramatists of The Crown suggest Queen Elizabeth liked Wilson and despised Heath.

That I tend to believe. It’s exactly how I felt about them.