Johnny, Who the Hell Were Ye, Anyway? 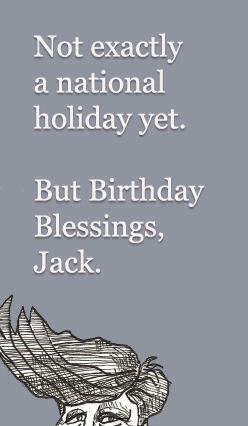 May 29, 2019 – Jack Kennedy – that rich, sex addicted, dissembling, amoral philanderer who charmed a generation and kept the world from blowing up – would be 102 today.

I still miss him. Here’s an essay I wrote last year on the 55th anniversary of his assassination.

November 22, 2018 – Today is Thanksgiving and also the 55th anniversary of the assassination of John F. Kennedy. As Billy Joel put it, “JFK, blown away, what else do I have to say?”

After more than half century, the ironies we feel at our Thanksgiving tables have nothing to do with JFK. This year other things mitigate the blessings we count. In 1963, we knew the occupant in the Oval Office had stirred the idealism of a generation by favoring Civil Rights, planning fair housing and fair employment opportunities for struggling working people, seeking an end to the arms race, calling for humane immigration laws, and sparking the greatest technological advances in history by setting a goal to land a human being on the moon. All that made it possible, even in the gloom a week after his death, to celebrate a day of thanks.

Today our thanks are mitigated by another dweller in the Oval Office, a chief executive whose racism and xenophobia are palpable, who doesn’t believe in science or global warming, who believes tax cuts should benefit the rich and not the poor, who believes teachers and pastors should be armed with guns, and who has slammed the door on millions of would-be immigrants to the United States.

In many respects, it’s harder to be thankful today than it was November 28, 1963, a time of deep national mourning.

Those of us of a certain age remember John F. Kennedy with unfeigned fondness. As one whose memories of November 22, 1963 will always be painful, I rarely see a picture of JFK without thinking how much better it was when we admired and trusted the Oval Office occupant and when most people respected the President regardless of party.

I would hate to think those days are gone forever and in my more rational moments I sense the current circus in Washington will be gone in an election or two.

But also – in my more rational moments – I am beginning to sense that my scorn for Trump is making it hard to be objective in my idealistic affection for Kennedy.

One thing Jack and the Donald had in common: they were both rich men’s sons with a strong sense of sexual entitlement and misogyny on steroids. I’d like to think JFK was too much of a gentleman to grab genitalia without warning, but Stormy Daniels’ description of Trump’s assault reminded me of White House intern Mimi Alford’s description of how she lost her virginity to JFK in the White House residence: “The next thing I knew he was standing in front of me, his face inches away,” she writes. “He placed both hands on my shoulders and guided me toward the edge of the bed.”

Another thing JFK and DJT have in common is the ability to get away with it. Most reporters and all Secret Service agents knew Kennedy was having trysts with different women on the average of once a week, but no one thought it was appropriate to invade the president’s privacy. When a reporter asked White House Press Secretary Pierre Salinger about Kennedy’s affairs, Salinger said, “Listen, he’s the president of the United States. He has to work 16, 17, 18 hours a day. He’s got to handle foreign policy. He’s got to handle domestic policy. If he’s got time for mistresses after that, what the hell difference does it make?” The reporter laughed and nothing was ever written.

That was a time when the press and most Americans believed the private life of the president was no one else’s business. But even before the #MeToo movement cast light on the widespread abuse of women by powerful men, politicians knew they were under greater scrutiny. A Republican House of Representatives impeached President Bill Clinton over his 1990s affair with Monica Lewinsky, and earlier this year Senator Kirsten Gillibrand (D-NY) said “looking back on it, Clinton should have resigned.”

Trump’s misogyny, on the other hand, has taken place under the full glare of the klieg lights and scores of women have come forward to accuse him of abusive behavior. Still, his popularity polls, which hover at just over 30 percent, are unaffected and Trump’s base remains strongly supportive of him. But I have serious doubts whether history will be as kind to Trump as it has been to JFK.

Looking back on the 55 years since he has been gone, I confess I still think JFK was a great and effective president and I still miss him greatly. There was so much that he did right, and millions of Baby Boomers were inspired by his example to lead constructive lives that made the world better.

But there was so much about John F. Kennedy that we did not know when he was alive, principally, that he was a powerful man who took advantage of scores of powerless women.

How much difference would it have made if we had known?

That’s a contextual question that is difficult to answer in 2018. It’s a little like condemning Washington because he owned slaves in the 18th century, or scorning Lincoln because he was a racist in the 19th century. In the 1960s, Kennedy’s sexual conduct was placed in the category of “what the hell difference does it make?” and in 2018 the same behavior is clearly monstrous.

But that is the point. The behavior is clearly monstrous.

And the current occupant of the Oval Office – and his minions – would do well to remember that.