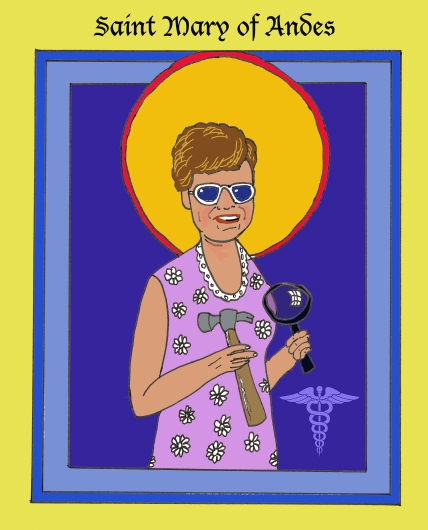 On a cold, rainy May day here in Port Chester, N.Y., I am remembering how she used to love the warmth and flowers of May.

In the Catskills where she grew up, and in Central New York where she lived most of her life, May is the month when Spring declares its final victory over the bleak and snowy winter.

Mom hated winter and was hoping to retire in Florida, but she died in a Syracuse hospital days after her 60th birthday so it was not to be.

Happily, Mom was vibrant and active right up until the sudden onslaught of Acute Myloid Leukemia. She had just returned from a trip to the Soviet Union where she met with other nurses and complained of being tired when she got back. I called her to ask if she would be up to a visit and she said of course, she would certainly feel better in a week. But the tiredness got worse. She was already in the hospital when I made it home, sitting up in her bed and blithely handing out gifts and souvenirs from her Soviet trip.

As a registered nurse, she had no illusions about the particularly devastating form of leukemia she had but she remained positive until the end. The last night I saw her in the hospital she was breathing through an oxygen mask and couldn’t converse freely, so she asked me to read the 23rd psalm to her – authorized version – until she fell asleep.

I find it comforting that she packed a lot into her 60 years, and when people ask me about her I’m reminded how remarkable she was.

As a young adult she was legally blind. She and her brother had a genetic disease that caused the progressive deterioration of their corneas and during my teen years she could see only dark silhouettes of the images in front of her. “It was like seeing the world through wax paper,” she explained.

But her poor vision was not sufficiently disabling to keep her from entering the house building and real estate business, which she did when I was still in high school. She formed a small business called Morrisville Quality Homes and I remember watching the first of the sturdy houses go up in a lot behind our street. She couldn’t help with the actual construction but she spent hours sanding walls and feeling the smoothness with her fingers.

She was working inside one of the houses in 1963 when the radio reported the assassination of John F. Kennedy. In a strange way she was not surprised by that because she had for years talked about a premonition that a Democrat would be elected in 1960 and would die in office. Mom’s eclectic religious views were Presbyterian-plus. She also believed in disambiguation and seances and she admired the works of the clairvoyant Edgar Cayce.

When I was in the Air Force in the 1960s, she had a cornea transplant and her vision was completely restored. This type of eye surgery was still rare and her head had to be immobilized between two sandbags as she recovered in the hospital bed. When she removed the bandages, her immediate reaction became part of family lore: “Oh, my, that coffee is so black and that saucer is so white.”

Mom and two of my sibs – Larry and Jim – visited me in England in 1967, in part, she told one of my high school girl friends, “so I can see what he really looks like.” We toured London, saw Dr. Zhivago in a theater filled with cigarette smoke, and visited the Air Force base where I lived. Mom was particularly delighted by the English flower boxes in front of every home and she absorbed everything with moist, clear eyes.

The following year she enrolled in the nursing program at the State University of New York in Morrisville and I’m sure all my siblings remember helping her memorize the names of bones, tissues, and human organs. Once she had her degree she went to work as a nurse in the Gerrit Smith Nursing Home in Eaton. She enjoyed working there with my sister Susan, sister-in-law Colleen, Darrin, and others she loved.

Mom loved her children and grandchildren unconditionally, and she showed her Depression-era sensibilities by making sure everyone had enough to live on and, in some cases, had everything we wanted. I once mused it would be nice to have a microwave oven and she whipped out her credit card before I could finish the sentence.

Mom was a nursing supervisor when she fell ill. Becoming a nurse was a lifetime ambition for her, and I’m glad she was able to fulfill that goal so happily. She modeled a life that helped the rest of us face life’s hills and valleys with courage, optimism, and grace.

Thirty-six years on, it still seems unfair that she was taken from us so early. In my reveries I like to imagine her as an old lady handing out little gifts to her grands and great-grands, surfing the internet, which she would have loved, following the Yankees on a huge HDTV screen, and expressing her horror over what Donald Trump is doing to her beloved country.

How she would have loved talking about all that in the weekly phone conversations she used to have with her offspring who had moved away.

And how I miss those conversations even after so many years.

The drawing above was inspired by the copious work of Brother Robert Lentz, OFM, who has created icons for hundreds of non-canonical saints.