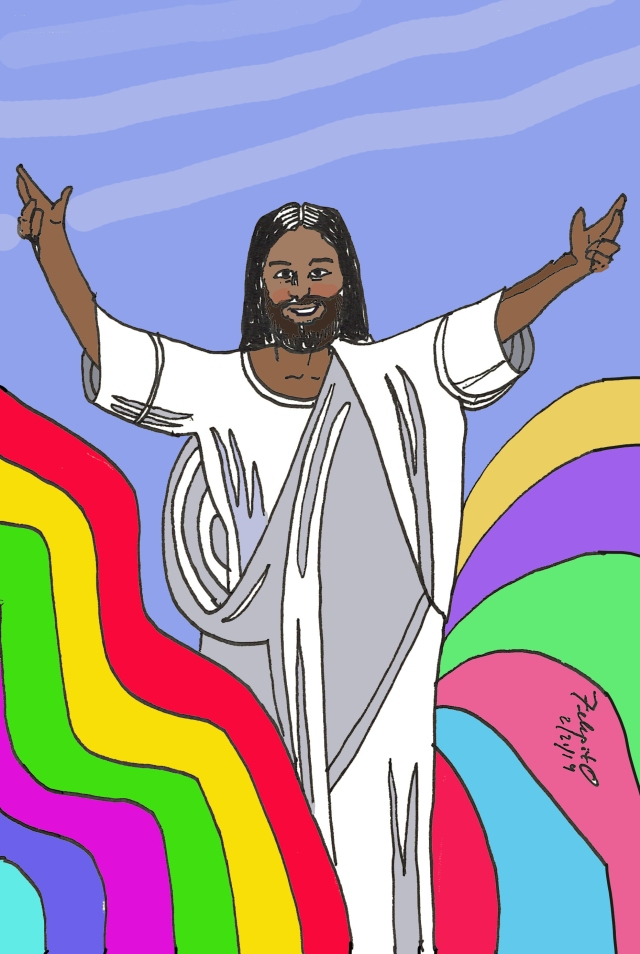 I never miss a copy of LivingLutheran, the monthly magazine of the Evangelical Lutheran Church in America, in part because it’s a superb denominational magazine.

As I leafed through the February 2019 issue I came across the lead in an article on “Grace and God’s Welcome:”

“Joseph Castañeda Carrera first sensed a call to ministry as a teen, but as a gay man of color, he found no ready place in the church.”

The article goes on to describe the ELCA’s Reconciling Works, “which has worked since 1974 for the full welcome, inclusion and equality of lesbian, gay, bisexual, transgender and queer (LGBTQ) Lutherans in all aspects of the life of their church, congregations and community.”

My home church is a Reconciling in Christ Lutheran congregation that extends its welcome to all people, and I am grateful for that.

But I knew full well the pain that lies beneath the surface of that declaration in 1974 because the issue of LGBTQ equality in society and the church tore apart my former denomination, American Baptist Churches USA. The conflict among American Baptists rose to the surface in 1973 with the publication of an article in The American Baptist magazine, entitled, “Alternate Life Style.” The title was selected in an effort to mute the intensity of the main topic, which was about a conference on homosexuality in American Baptist life.

I was 27 when I was assigned to report on the seminar. The four-page article (scanned here) provoked dozens of angry letters. “The kind of permissiveness which allowed you to print the article, and Mr. Jenks to attend the meeting, allows the Devil to get his foot in the door,” wrote a woman from Crawfordsville, Ind. Others wrote, “Your article left me in a state of shock,” “I was truly grieved,” and, “I was appalled, disgusted, and saddened.”

On re-reading the article this week, I am not entirely satisfied myself about the way it reads. I remember thinking it might encourage readers to read it with open minds if I expressed my own ambivalence about the issue, but this was largely feigned as an editorial conceit. As a matter of fact I was never hesitant about it.

I believed, then and now, that God creates human beings with a large range of diverse and wonderful gifts over which we have no control but which God invites us to use as fully as we can. These gifts include our race, our ethnicity, our athletic ability or lack of it, our capacity to write or draw or carry a tune, our Myers-Briggs personality range, and – certainly – our sexual orientation and sense of gender identity. These are God’s sacred gifts, and we sin if we don’t strive to use them to the fullest. Moreover, institutions sin if they prevent anyone from living full, productive, and happy lives on the basis of any of these attributes.

There is no way I could have written that so explicitly in 1973 and, if I had, I’m sure my editor – whose courage permitted the article – would have judiciously deleted it. Now, when I am retired and have nothing to lose, I can write what I believe.

In 1973 – and in 1974 when the ELCA’S Reconciling Works was formed – most LGBTQ people were often forced to hide amid the institutional ignorance that surrounded them. Many persons of faith – then and now – accepted ancient scripture texts as proof of God’s condemnation of homosexuality. I knew and loved many colleagues during my 20 years on the American Baptist staff who hid their orientation in order to keep working in the ministries to which they had been called. In what may have been the darkest hour of American Baptist life, an ad hoc group of evangelicals formed an Internet group in the 1990s and began to “out” members of the staff. They did this purportedly because they believed they were called by the Holy Spirit to assure the sexual purity of the staff, but one must wonder if their actions were a blasphemy against the Spirit for which there is no forgiveness. (Besides, the American Baptist staff, as in any other grouping of humans, was never sexually pure. See my commentary written at the beginning of the #MeToo movement in 2017.)

Of course, it is not just my ecclesiastical colleagues who suffered the suffocation of the closet in order to keep working. Looking back in my high school years, I wince at the bullying experienced by boys deemed to be effeminate. Many others kept their proclivities private. Years later, some attended class reunions with same-gender partners, but others are still trapped in society’s sexual ignorance.

Looking back on the article I wrote in 1973, it’s long passed time to pay tribute to some of the heroes of the movement. To the best of my knowledge, Rodger Harrison still lives in Palm Desert, Calif. I meant him several times during my early years with the Baptists and found him to be extremely pastoral with a self-effacing sense of humor. I once sat with Rodger and Ralph Abernathy, the former lieutenant to Martin Luther King, Jr., during a Baptist meeting in San Diego. Rodger said, “Someday, Dr. Abernathy, I hope our movement will receive the same volume of moral support as yours.” I studied Abernathy’s face but couldn’t detect a reaction.

I tried do locate some of the persons mentioned in the article. I couldn’t find John Preston, although he left the Minnesota Council for the Church and the Homophile after the article was published. Dr. Robert L. Treese, Barbara Gittings, and James A. Christison, Jr., have died.

So has Norman R. De Puy, the editor who assigned me to cover the seminar on Homosexuality and the ABC. Norman’s theology was always profound, and I quoted him in the article: “All Christians are sinners, therefore a homosexual is a sinner,” Norman said. “So let’s call the homosexual a sinner and get on with it.”

Forty-six years after the article was published in The American Baptist magazine, it’s heartbreaking how much more progress needs to be made to help many persons of faith reach that conclusion. It’s worth celebrating that LGBTQ persons now have the Constitutional right to choose whom they will marry. At the same time, thousands of people still cling to a shallow interpretation of brass-age scripture to justify discriminating against their fellow human beings.

I do hope Lutherans will deluge Jennifer Younker, the editor of LivingLutheran, Pastor Meghan Johnston Aelebouni, writer of the article, with letters supporting “Grace and God’s Welcome.”

I know the readers’ response will not be unanimous, and there will be plenty of people who still don’t understand God’s grace is for all people.

But God’s grace is an irresistible force in the moral universe.

And I am grateful for the courage of the journalists at LivingLutheran to remind their readers of that reality.