Santa and Jack: Keep the Myth 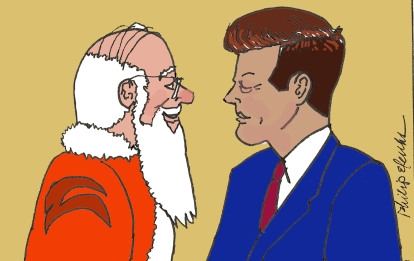 John F. Kennedy had been dead 13 years by the time the first of our six adult children was born. By the time they cracked their first high school history book, JFK had long since passed from flesh to myth. He had become a two-dimensional icon along with Washington and Lincoln and Roosevelt, and his passing was notable primarily because it was one of four presidential assassinations that had to be memorized.

For me, John F. Kennedy’s presidency and his sudden passing were intensely personal events – “the semicolon,” as one writer put it, “of my life.” Boomers will know what I mean when I say everything was different after JFK died. Hope, idealism, and a respect for authority, all dimmed. J. Patrick Moynihan remembered a conversation with journalist Mary McGrory after the assassination. “We’ll never laugh again,” McGrory said through her tears. “Heavens, Mary, we will laugh again,” Moynihan replied. “It’s just that we’ll never be young again.”

I was 17 when JFK died and I did laugh again but the character of my youth changed. Before November 22, 1963, I enjoyed the protection of a close-knit family in a village that provided predictable comfort in a safe middle class cocoon. After that, my youthful optimism was modulated by the realization that horrible things could happen without notice and beyond reason.

My children always observed, if not always with understanding, that the anniversary of Kennedy’s death was a day of mourning for me. They respected that although, I suspect, it would have made as much sense to them to shed tears on the death dates of James Garfield or William McKinley.

And we have learned a lot about JFK in the 55 years since he died, including his chronic womanizing, his painstaking deceptions to hide his poor health, and his patrician inability to fully comprehend what it was like to be poor or a person of color in America. As Professor David Greenberg wrote this week in Politico on the death of former President George H.W. Bush, respect for the dead must coexist with the historical record.

Last week my 12-year-old grandson watched an episode of a television series devoted to museums and science. This particular program examined the logistics and physics of the Kennedy assassination to determine whether he was shot by more than one gunman. The program included a clip from the Zapruder film, which is not family viewing.

“He was very upset by it,” my daughter said. “He said he had no idea what it had been like, ‘but there was all this blood everywhere.’”

Indeed, this vivid Super8mm film of the president’s head exploding is one of the ghastlier artifacts of U.S. history and no child should have to see it (not withstanding the fact that it can be instantly Googled). The rosy Camelot myth of JFK is charming and endearing; the harsh reality not so much. But I will always be charmed by the myth.

For the past several weeks I’ve been working on a small children’s book for our five grandchildren, The Hot Christmas of 1962. It’s a fanciful story about how Christmas was threatened by global warming until it was rescued by two equally mythological figures: Santa Claus and John F. Kennedy.

Without reopening the debate about the reality of Santa Claus (Yes, Virginia), I will freely admit that there was no such person as the John F. Kennedy of myth.

But when I look back on my own youth, I very much wish that the mythical JFK still walked among us.

And for a few brief moments, in The Hot Christmas of 1962, he does.

And I’ll leave it to my grandchildren to decide whether any of it is real.