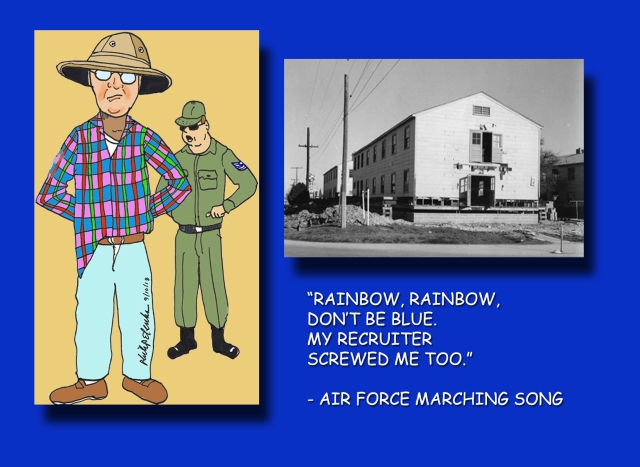 Nine of us adolescents were sworn in at an induction center in Syracuse and bused to Hancock Field for the flight to San Antonio’s Lackland Air Force Base.

The aircraft was tossed around by heavy turbulence as it skirted a southern hurricane but I had never flown before so I thought the severe bumps were normal. One of the attractive young flight attendants was thrown off her feet and fell into the uncomplaining lap of one of my fellow recruits.

It had been a cool pre-Autumn day when we left New York, so the heat and humidity of San Antonio was suffocating. We arrived in darkness at 0430 and were quickly collected by a civilian bus driver to be transported to the training center. Several of the recruits, with New York entitlement, ordered the Latino driver to move his ass so we could get to the base and go to bed. The driver smiled and said, “When we get there, you will wish you were back here.”

The sun was rising as we filed sleepily off the bus and were met by training instructors TSGt Saxon and A1C Ellefson. Many more young recruits who had just arrived gathered with us. If we had any expectation of getting sleep that day, it vanished when the two TI’s roughly grabbed us by the arms and forced us into flight marching formation.

The TI’s began berating us loudly, using obscenities that were unfamiliar to most of us. Most were not used to this kind of verbal abuse, but the stream of sexual and excretory invective, uttered in crude iambic meter, seemed almost poetic. In a comparatively gentle gibe, Ellefson shouted into the face of a large, lumbering recruit, “Jesus, you walk like a girl.”

For some reason the boy, who had been a running back in local high school, thought he was expected to challenge the sergeant.

“I don’t care for your attitude,” the boy said with a look that must have been intimidating on the line of scrimmage.

The boy didn’t get a chance to repeat his challenge.

“Sarge,” Ellefson screamed to his colleague. “We gotta wise ass here!” Sergeant Saxon, a muscular man with a barrel chest, stepped over and quietly  pulled the boy out of line. He escorted him several feet away.  I couldn’t hear what the sergeant was saying but he seemed to be quietly menacing the boy, emphasizing each threat with a poke in the chest. Whatever the sergeant said. it was effective. The boy returned to the line in a more docile mood.

Somehow the two sergeants managed to get us into a formation suitable for marching. Nearby, training flights marched past us on the way to morning mess. They had had been on base long enough to be outfitted with green fatigue uniforms, which made them vastly superior to us. In our civilian clothes, we felt like teenagers playing war, which wasn’t far from the truth.  Military discipline forbade the senior uniformed troops from laughing at us, but their drill sergeant led them in a taunting marching song,

“Rainbow, Rainbow, Don’t Be Blue, My Recruiter Screwed Me, too!”

The song derided us for our multi-colored mufti. We would wear the clothes we arrived in for the next several days until the sergeants arranged for us to receive our uniforms. The only concession to uniformity was a large pith helmet that was designed to protect us from the searing Texas sun. The helmets wobbled on our heads as we marched clumsily to a barber shop where our civilian locks would be buzzed away. My memory is hazy, but I think we spent most of our first day at Lackland Air Force Base learning rudimentary marching skills. Boys who had been in high school marching bands had a distinct advantage over the rest of us.

Late that night when we finally got to the barracks – a World War II vintage building much like the one pictured – I was so sleepy I was hallucinating. It was hot in the barracks, but we were ordered to hang our clothes on hangers and slide beneath the heavy wool GI blanket on the bed. Despite the heat, most of us fell asleep immediately.

At 0500, Airman Ellefson walked between the rows of bunks.

“You people get up and make yours beds.”

Several recruits slid out of bed and began to head for the latrine, but Ellefson blocked their way.

Compared to the initial shock of arriving on base, the rest of Basic Training was easy. We marched in the Texas heat, ran around a quarter-mile track in heavy brogans, polished our low-quarter shoes, ran the obstacle course, learned to salute, sat many hours in air conditioned class rooms learning military customs, and generally learned how to take illogical  orders and homophobic taunts from the sergeants with a modicum of self-respect. Most of us got through it. Millions of men and women get through it each year, and are better people for it.

I stayed in the Air Force for four years after basic training, and they were good years. So today is a day I will set aside to reflect back on basic training at Lackland Air Force Base and marvel how an event so far removed in time and space has never faded from the memories of my life.

Fifty-six years on, I no longer worry about spit-polishing my shoes. But I still won’t leave the house without checking to make sure my gig line is straight.

And with any luck, my fly will be zipped, too.