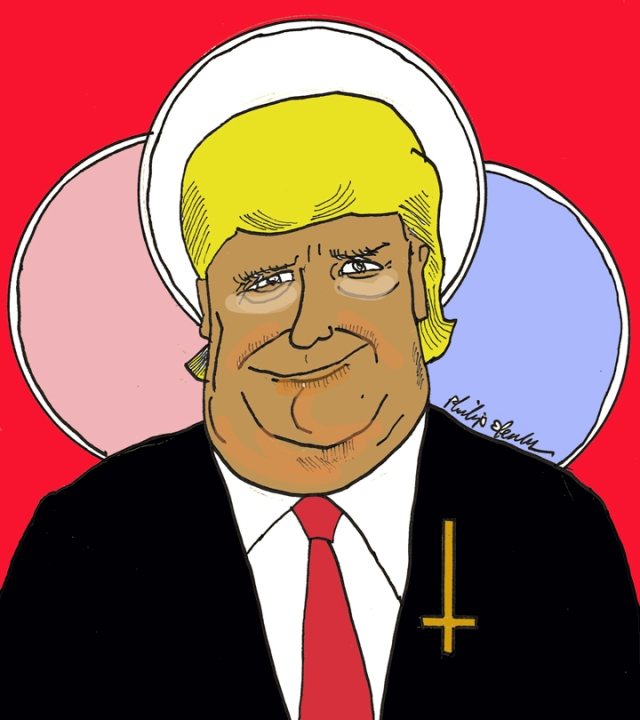 August 3, 2019 – My social media world is a fairly insulated community of flatulent former flower children, church nerds, and enlightened Boomers. Thus I might get the impression that everyone thinks Donald Trump is a lying, semi-literate narcissist with borderline personality disorder. Can I get an amen?

But on occasion I catch glimpses of the Trump base: old Air Force buddies who routinely retweet the Donald’s claims that objective reporting is fake news, or high school and college chums who insist he is a good Christian man who rescued us from dark Obamaness and is courageously protecting the country from Mexicans and Muslims.

WTF? As a church communicator and erstwhile newspaper reporter, I’ve often brushed against right-wing zealots and white supremacists paralyzed by fear that persons they regard as inferior or different – others – will take over their neighborhoods, jobs, and sex partners. As a newspaper reporter I’ve interviewed Nazis and quickly realized there is little point in having a dialogue with them. Their brains are held hostage by hatred. You could remind them that Jesus told them to love and welcome everybody but they won’t hear you.

Is this the same cast of mind that has taken over a third of our country? I no sooner ask that than I begin to hear the complaints of old (and former) friends that Trump supporters are good and decent people like everyone else and they just want America to be great again.

I could accept that but for the fact that so many Trump supporters justify their views by their religion, especially Christianity, and by an eccentric interpretation of scripture.

Again I ask, WTF? By that I mean, on What Tenet of Faith is based this fear and hatred of others? Where in scripture are government leaders given authority to separate refugee children from their parents and abuse them by locking them in cages? Where is the perpetual bearing of false witness prescribed as the basis for policy formation? Where is it okay to grab the vagina of another man’s wife, as if God said it was okay when King David did it? And here in the bible is it argued that taxes should be reduced for the rich and budgets balanced on the backs of the poor?

The current chaos makes me nostalgic for a simpler era of theological debate. When I was a student at Eastern Baptist College 1968-71, the school was a righteously Republican-leaning institution where good Christian living was deemed to be on a par with sound financial management.

I should say that I cast no aspersions by my reference to Republicans. Back then we still liked Ike and Nelson Rockefeller and Mark Hatfield leaned slightly to the left of the Kennedys. It would be decades before so many Republicans sold out to Trumpism, and even now some of my best friends are Republicans. (See my earlier meditation on good Republicans here.)

But in 1968, when it came to finance, we students took seriously whatever Jesus said on the matter. He didn’t say much, but what he did say was terrifying:

“Go, sell your possessions, and give the money to the poor, and you will have treasure in heaven; then come, follow me.” (Matthew 19:21)

For business and economics students, this seemed like an unreasonably delayed return on investment.

“Jesus didn’t literally mean, ‘sell all you have,’” we’d argue. “Look, he also said it’s easier for a camel to go through the eye of a needle than for someone who is rich to enter the kingdom of God.” (Matthew 19:24). That was clearly hyperbolic humor.

“But,” someone would interject, driving the point home, “With God all things are possible.”

That’s where the financial exegesis would conclude. Jesus said sell all you have but he was using humor to make a point and in the end God would throw open the gates of heaven to the rich.

Understandably, this is one of the few scriptures that conscientious Baptist students didn’t take literally. There were many students in 1969 who believed in a literal Adam and Eve, a real Ark, and the division of the Red Sea. Many looked past the obvious implications of David’s passion for Jonathan to see Leviticus 18:22 as a condemnation of gay relationships. But for the most part, Levitical law was ignored and no one worried that the injunction against touching the skin of a dead pig might be the death knell of Sunday football.

Looking back these many years, such exegetical discussions seem to belong to a simpler era when we believed most business and government leaders, regardless of their political slant, were essentially good, God-fearing folks. John D. Rockefeller Jr. never considered selling all he had and giving his money to the poor, although if he had he could have wiped out poverty in America. But he diminished his camel considerably with his philanthropy by building Riverside Church in Manhattan and financing many a church mission board and retirement program. Who knows that by the time John D. Jr. got to the gate of heaven his camel was tiny enough to squeeze through the keyhole without extraordinary assistance from God.

I’m not sure what John D. Jr.’s precise theology was but I presume his Baptist background led him often to the passage of Jesus’ conversation with the rich young ruler. That, and Rockefeller’s generous philanthropic impulses, suggests he well understood Jesus’ command to love God and to love all people. Just as we students slowly realized during our bible debates at Eastern Baptist College, the law of loving God and neighbor becomes the lens through which all other scripture must be seen. This relieves us (as the immortal President Bartlet pointed out) from following scriptural requirements to stone a farmer for planting different crops side by side or burning one’s mother in a small family gathering for wearing garments made from two different threads. If ancient scripture doesn’t measure up to God’s love or God’s requirement that we love our fellow human beings unconditionally, it should be abandoned to the Iron Age where it last made sense.

During my years at Eastern, many students used love-of-God-and-neighbor as a handy moral compass. My generation was famously active in the movements to end the Vietnam War, stop poverty, advance civil and human rights, sponsor refugees, seek more opportunities for physically and developmentally disabled persons, seek justice for prisoners, and protect the environment. All of these activities came under the heading of loving God and people, and lest their be any doubt Jesus made it even clearer:

Looking back on these years of hippy hermeneutics, I sometimes wonder if our fervor took us too far or not far enough. We thought free and frequent lovemaking fit neatly into the guidelines of loving our neighbor providing no one gets hurt, which, in practice, is hard to avoid. And it was years before we Boomers understood that God’s love includes cisgender, transgender, LGBTQ, and all God’s children bar none. But we gradually came around because God makes it plain that love is love. Selah.

I am by no means a systematic theologian, but this construct of love of God and love of neighbor has been the foundation of my faith all my adult life.

It had also provided a context for my political views, and I’ve often cast my vote in accordance with which candidate appeared to me to have the greater understanding of Love to the least of these.

No candidate, of course, has been in perfect sync with Jesus, but who has? In 2008 and 2012 I was a member of an interfaith group that encouraged presidential candidates to take action to alleviate severe poverty in the U.S. But persons living in severe poverty have little political leverage, so the candidates – McCain, Romney, and Obama twice – chose to focus their attention on the struggling middle class rather than the suffocating poor. Even Hillary Clinton, in her sadly imperfect campaign, appeared insensitive to the needs of persons so poor they were literally dying.

But despite their imperfections, I never doubted that these politicians were good people and that their hearts and minds could be opened if they gave God a chance.

It is only since January 2017 have I sensed that Donald Trump and his people in power have vigorously rejected the entire premise of God’s relationship with God’s creatures and with God’s green earth. Instead of turning to the God of love for sustenance and direction, they have created a fetid quagmire of hate and distrust, a squalid bog in which the rich come first, middle class white people are promised their proper place, and those regarded as others – Muslims, Latinos, African Americans, LGBTQ people – are regarded as enemies. And anyone who says it’s happening is a purveyor of fake news.

This is not a godly government. And my prayer is that it will not survive beyond the 2020 elections.

Because I will be 72 next month. And I would like to believe I will live long enough to see the odious effects of Trumpaneutics finally cleansed from the land.