Grandpa, What Was Print Media? 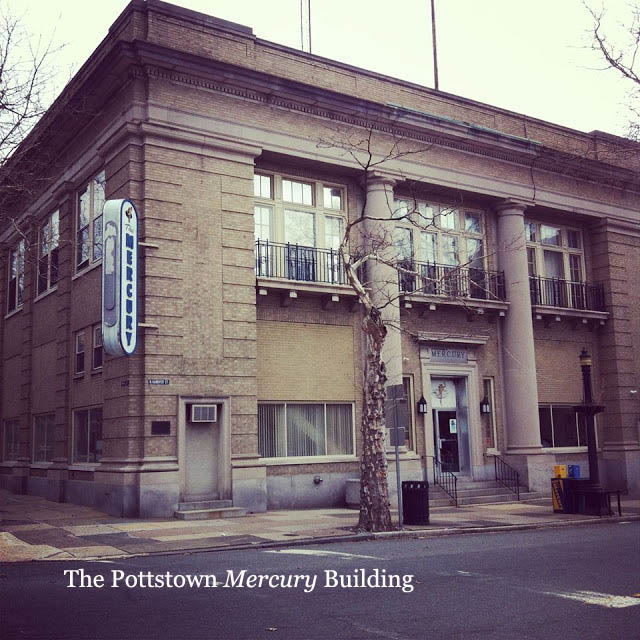 July 29, 2018 – A few years ago my oldest grandson asked what I had done in the Air Force and his father told him I had used a typewriter. “What’s a typewriter?” he asked.

Now before my youngest grandson asks me what a newspaper was, I thought I’d better record some thoughts before I forget the answer.

Earlier this month the New York Daily News announced it was firing half of its newsroom staff, a draconian move by publisher tronc Inc. and only the latest development in the decline of daily newspapers around the country,

The decline has also affected my favorite local rag, the Pottstown Mercury, where I worked as a staff writer for three years in the early 1990s. Editor Evan Brandt’s recent post about the closing of a building that housed The Mercury is the latest rasp of the death rattle of small-town newspapers.

According to Brandt, The Mercury will continue to publish and staff will be asked to work from home or at the paper’s Exton, Pa., printing plant. But it’s not a good sign, and clouds of doom hang over all print media. Earlier this year New York Times CEO Mark Thompson estimated that the newsprint Times would disappear in ten years.

“We’ll decide that simply on the economics,” Thompson told Kellie Ell on CNBC’s web page. “There may come a point when the economics of [the print paper] no longer make sense for us.”

The tear I shed over this development is, I confess, slightly hypocritical because I already read the digital Times on my iPad. I also read the Merc on line because I live a hundred miles from the paper’s closest coin box.

I was a cops and politics reporter for the Merc from June 14, 1992 to June 21, 1995. It was an intense and generally enjoyable experience although, looking back, it was only a brief interlude in my 40-year career as a church communicator. The Merc’s editorial and advertising offices were on the second floor of the now redundant building. Even 25-years ago the building seemed old and reporters once filed an OSHA complaint that the stale air gave them headaches. There was no evidence that the air was bad but I suspect the real purpose of the complaint was to call attention to the fact that the publisher was hermetically sealed away from the reporters in a freshly painted air-conditioned office.

I was not party to the complaint. In fact, I found little to dislike about the Merc. Unlike church workers, who think their tasks are so godly they must take work home at night and on weekends, the Mercury didn’t like paying reporters overtime and refused to allow it. If I had to cover an evening school board meeting I’d come in at noon. If there was no evening meeting I’d come in at 10 a.m. and leave before 7. I’d interview sources, write two or three stories, and when I filed them with the editor my day was done.

On Tuesday nights, if my day was over by 7, I’d kick off my shoes and watch ABC’s NYPD Blue, a police procedural about a detective squad with a management style very much like the one in our newsroom. On television, Lieutenant Fancy would get a call about a crime occurring somewhere in Manhattan South; in the newsroom, Editor Walt Herring would get a call about an accident, robbery, fire, or other news event in the Pottstown coverage area. On television, Fancy would call out the names of two detectives and order them to the scene of the crime; in the newsroom, Herring would call out the names of a reporter and photographer and send them to the news event. On television, detectives Sipowicz and Simone would arrive at the scene where they would always find a place to park and use their fists or pistols to subdue the malefactors and haul them into justice; in the newsroom, the reporter and photographer would double park, take pictures, interview sources, and return perspiring to the newsroom to process the story for the next day’s edition.

I have to admit that I loved it. Sometimes the news we covered was not pleasant. The first story I covered for the paper was a fire that cost the lives of three young children. Photographer Kevin Hoffman and I were occasionally first to the scene of grisly automobile accidents where the smell of blood wafted with the odor of gasoline fumes. Sometimes a driver’s mangled body sat strapped akimbo in the seat until the coroner arrived to officially declare what first responders could already see. One January, Kevin and I covered the crash of a small two-engine commuter aircraft that failed to take off from the Limerick, Pa., airfield in a snow squall. The bodies of two young businessmen showing no signs of trauma were strapped in the back seats, but the body of the pilot had been torn apart by the impact. Limerick Police Chief Doug Weaver called me over to look. “Here’s something you don’t see every day,” he said, pointing to the pilot’s heart which was exposed on the outside of his chest cavity.

Most other news events were more prosaic, including school board or township meetings or preliminary hearings in district court. Most meetings were too boring to make for interesting reading, and when something exciting did happen – as when a school superintendent called one of his board members a “little shit” – it had to be reported obliquely because the Mercury was a family newspaper. But I loved writing the stories, filing them, going home to bed, and – best of all – coming in the next day to see my byline on the front page. The very last story I wrote for the Mercury, was in June 1995, when two elderly men in a trailer park got into an argument and shot each other with .22 rifles. They were both bad shots and both lived, but I had to leave it to other reporters to do the folo. That month I was on my way to New York to join the staff of the World Council of Churches.

The Mercury continues to publish a print version and I hope it continues for many years. But the future of print journalism is not bright. After 579 years Gutenberg has been succeeded by Zuckerberg. A digital mirage on our smart phones is replacing the tactile comfort and smell of newsprint and ink.

Granted, reading a newspaper online is convenient (so long as your power source lasts) and news updates are instantaneous. Nor can I see myself patiently waiting for the bulky Times to be tossed on my front lawn when I want to read Charles Blow NOW.

When the final paper Times rolls off the press, I’ll miss it terribly. And now when I pick up my iPhone to read the instant headlines, I’ll try not to remind myself that my need for instant news gratification – and yours – was ultimately responsible for the end of print.