Cadet Bone Spurs and His Parade of Power 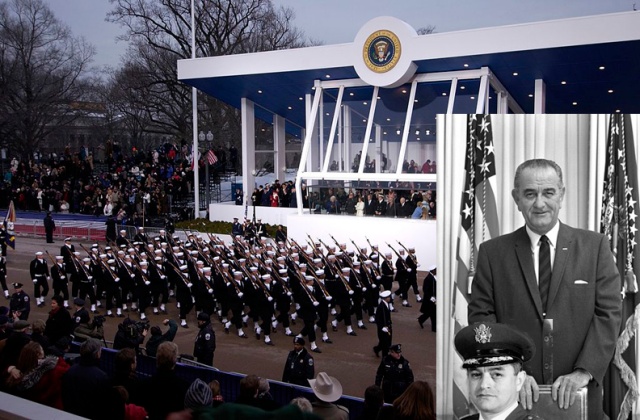 Who Loves a Parade?

Certainly not the GI’s forced to march in one.

The current commander-in-chief – Cadet Bone Spurs as he has been aptly dubbed by Senator Tammy Duckworth, a bona fide war hero – has no way of knowing this because he has never served in the armed forces. Marching in military formation is never a GI’s idea of a fun way to spend a Saturday afternoon.

I’m extrapolating from my own military experience 50 years ago but I can’t imagine this attitude has changed much. I once heard my father, who served in New Guinea during World War II, express the disgust he felt when he was ordered to join a post-war victory march in his hometown of Oneonta, N.Y. “People want to cheer us and thank us,” a long-forgotten colonel told him. “Then let the civilians march in the street while we stand on the sidewalk drinking beer,” Dad replied.

Of course every member of the armed forces is trained to march, and often it comes in handy. I have vague memories of marching in formation on RAF Station Bentwaters in England in the 1960s during a joint British-U.S. commemoration of something or other, but even the officers demurred. Squadron commander Captain Maddox, an owlish man with a business degree, couldn’t remember the command to dismiss us, so he shouted, “Rout Step until we pass your barracks and then fall out.”

The largest military parade I participated in was at McConnell AFB, Wichita, Kans., in the summer of 1968. President Lyndon B. Johnson had already pulled out of the presidential race but he remained deeply unpopular. He couldn’t step outside the White House without eliciting boos and chants of “Hey, Hey, LBJ, how many kids did you kill today?”

As a result, LBJ visited military bases where he could be sure his welcome, if not enthusiastic, would be quiet. When LBJ announced he was coming to McConnell AFB, he made it clear to Base Commander Brigadier General Bob Cardenas that he expected the red-carpet treatment.

Cardenas – who, the last I checked, is still alive at 97 – is also a bona fide war hero. Born in Mérida, Yucatán, Mexico, he moved to San Diego with his family when he was 5 and joined the Army Air Force in 1939. He was a fighter pilot during World War II and is probably best known as a test pilot for the Bell X-1 supersonic aircraft, the same that propelled Chuck Yeager to fame in The Right Stuff.

In addition to his mathematical and aeronautic acumen, Cardenas had another qualification to be a command pilot of the tiny Bell X-1: he is short. That was fine with most of us because heroes do not have to be tall and most of them are not. But his diminutive stature led to some awkward moments during the parade he called to honor President Johnson.

It was raining that day and no one wanted to be out on a parade ground marching 120 paces a minute while the President and General watched. The procedure was to keep our eyes rigidly forward as we marched until we passed the reviewing stand. Then the parade officer would shout, “eyes right!” and we’d snap our gaze in the direction of our leaders.

The first thing we noticed is that LBJ looked pissed, as if he was annoyed General Cardenas had failed to arrange for clear skies. The parade officer snapped a salute at the President who – this being before presidents returned military salutes – deepened his frown. But when General Cardenas snapped a return salute we noticed him for the first time, drenched in his class-A blues and standing about 15 inches shorter than the 6-foot, 3 ½ inch president.

It was an unexpected contrast and a few of marchers lost control and snickered at the Mutt and Jeff figures on the platform. Then somebody laughed out loud. The rest of us struggled to maintain military discipline but some could not suppress involuntary sinus snorts. There were tears in my eyes when we finally passed by, and not the kind caused by patriotic pride.

I have no idea what the President and general did the rest of the day. I returned to my barracks, took a hot shower, and put them out of my mind.

Fifty years on, I’m impressed by what General Cardenas did not do. He could have opened one of the missile silos or taxied a few B-52s onto the ground to show off the mighty arsenal at his disposal. Looking back, I suspect there was more lethal hardware on McConnell AFB than in the combined majority of nations around the world.

But nobody talked about that. Not only was it gauche to boast of such things, it was a violation of security. There was a fundamental understanding that it would be unseemly for the strongest nation on earth to swagger.

I hope that attitude has not been entirely suppressed by the current lot in power.

But before Cadet Bone Spurs decides to go ahead with his mighty parade, I hope he will first consult with the non-commissioned officers who will tell him the truth: the rank and file will hate it.

And when the parade officer orders the marchers to snap right and salute the current Commander-in-Chief, they may find it impossible to suppress their laughter.

1 Response to Cadet Bone Spurs and His Parade of Power