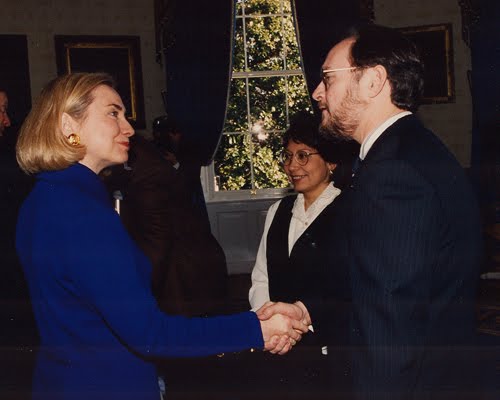 January 1, 2018. New Year’s Day is a time of reminiscing and I came across this December 2009 essay in my blogs. It tells the story of a happy experience in the White House in 1996. The Divine M and I met Hillary and Al and Tipper and wandered unsupervised in the historic halls. Back then, the White House was a venue of intellectual stimulation and hope. I only wish I had thought to warn Hillary to be careful with her emails.

The Salahis now say they were invited to the bash, despite White House insistence that they were not on any list of invitees. But admid the confusion, one thing is clear: the couple’s surprise visit to the Obamas remains big news.

For my spouse Martha and me, however, the Salahi’s caper sparked a sense of deja vu. We, too, have wandered unscripted through the ornate corridors of the White House.

What distinguished us from the Salahis is that no one noticed. Sure, our sober business apparel was not as attention-getting as Michaele’s stunning red sari or Tareq’s opulent tux. Photographic evidence provided by the White House suggests we could have been mistaken for Congressional aides or Calvary Baptist Church ushers. Too, it was a different era – first term Clinton Administration – and Plebian populists may have been allowed to wander the White House at all hours. But the Divine M and I contend that we crashed the White House just as brazenly as the Salahis. Even if it didn’t start out that way.

It all began on a chilly, gray day in late winter 1996 — March 4, to be exact. Martha was the official invitee to the White House. As communications director of Church Women United (CWU), she and other ecumenical leaders – including National Council of Churches General Secretary Joan Brown Campbell – were invited to 1600 Pennsylvania Avenue to accept the First Lady’s thanks for their support of V-Chip technology that controls what children see on television.

I had never heard of V-Chip nor was I invited to be thanked for it. I was, as was often the case in those years, merely tagging along with my spouse on interesting junkets. Even so, when M asked if I would like to tag along to the White House, I weighed the alternative – visiting the mustache wax exhibition at the Smithsonian – and said yes. She called a mysterious contact at the White House to ask if she could bring an escort and I was quickly added to the list.

I can’t remember where our hotel was, but I recall walking most of the way to the White House. I also remember standing next to Joan Brown Campbell at the gate where our IDs were checked. Joan, a friend of ours, was also a front-rank Friend of Bill’s, so she had been to the White House countless times and was probably not as excited about it as I was.

Martha, too, was calm. Her role as director of communication for CWU had placed her in frequent contact with the First Lady’s staff and she had also once stood in the rose garden with Bill and Nelson Mandela. In 1977 I had been among a kajillion religious journalists invited to the Carter White House, but that wasn’t quite enough to qualify as a grizzled old White House hand. The truth is, I was excited.

Thirteen years on, I can’t remember details about the layout of the White House. The invitees were escorted down a historic hallway into what could have been the State Dining Room. First Lady Hillary Clinton, dressed Superwoman-like in a colbalt-blue suit, welcomed the group and introduced Vice President Al Gore and Tipper Gore, both tireless V-Chip advocates. (Bill was not there.)

Hillary thanked everyone for their courageous support for the device that enables parents to prevent children from seeing television violence while I silently fretted about the fate of beloved visions of Wile E. Coyote and Roadrunner blood-bouts.

With everyone properly thanked, the First Lady invited us back down the hall (perhaps to the East Room) where a sumptuous coffee break had been laid out before us — long tables laden with silver coffee urns, silver trays filled with scones, cookies, chocolate truffles, cakes, sandwiches and assorted beverages. The spread was so splendid that I wondered if the taxes M and I were filing jointly that year would pay for it.

But before I could stuff my pockets with cookies, we were invited to a receiving line to shake hands with persons I assumed to be future presidents of the United States, including Hillary and Al. We exchanged a few words with Al and Tipper, prompting me to reflect briefly on what historians would conclude if they could record all the meaningless banality that is exchanged between political leaders and their constituents. Hillary, who often seems austere and distant on television, seems gracious, warm and even a bit vulnerable when she’s taking your hand. Martha has met Hillary on a number of occasions and I thought Hillary recognized her as they shook hands. Or perhaps the First Lady was simply recognizing a woman with a smile very much like her own.

As soon as we got through the reception line, the crowd of V-Chip radicals dwindled away. Hillary, Al and Tipper disappeared to wherever politicians go when their duty is finished and Martha and I found ourselves alone in a darkened White House hallway.

I wished I had filled my pocket with cookies, but then I had a more pressing thought. “I wonder if they have a bathroom in this place,” I mused. “In the White House?” Martha replied. “What do you think?” I looked around and saw a young White House staffer walking toward us.

“Just down the hall,” the young woman said.

“Of course.” And she disappeared.

Martha and I exchanged dubious glances and we began inching our way down the empty corridor. We found the bathroom and pushed open the door. It wasn’t the bathroom equipment that was impressive — the commode and sink probably dated back to the Truman renovation of the White House in 1948 — but the wallpaper looked like it would have added dignity to the Lincoln bedroom. “We’ve got to take pictures,” Martha said, pulling a camera from her purse.

We stood brazenly in front of the commode and flashed toothy Rooseveltian grins, photographing each other in historic stances. “Oh, look,” Martha said, pulling a paper towel out of a glistening silver dispenser. The towel was embossed with the presidential seal. We stuffed out pockets with paper towels (one of which is still suitably framed at home). Outside, the long hallway was dark and deserted. “How do we get out of here?” I asked Martha, whose sense of direction is as bad as mine.

We walked slowly so as not to attract the attention of any presidential ghosts in the corridor. Where was the staff? Where were the tourist guides?

We started peeking through open doorways into rooms that were strangely familiar. Portraits of presidents and first ladies hung on walls. A red room. A blue room. Just as I began to think they had locked-up the White House for the night, we wandered into what could have been the White House green room. I’m not sure about the color, but I recall a portrait of Benjamin Franklin hanging over a white fireplace, and a smaller portrait of Dolly Madison on the adjoining wall.

As we were studying the portraits, a bored young man wearing a pressed suit and an earphone appeared at the door. “You’re really not supposed to be in here,” he said.

Busted, I thought. But Martha quickly handed him her camera. “Would you take our picture?” she asked, flashing a Hillary Clinton smile. “Um. Oh, sure,” he said. Martha and I grinned again and were immortalized in film in an empty White House room.

The young man led us to a glimmer of light at the end of the hallway. We walked out the door into the cold, gray air.

They say the ghost of Abraham Lincoln walks the White House hallways. We didn’t see him, but we got to see the same things he sees. The White House, dark and empty, devoid of people.